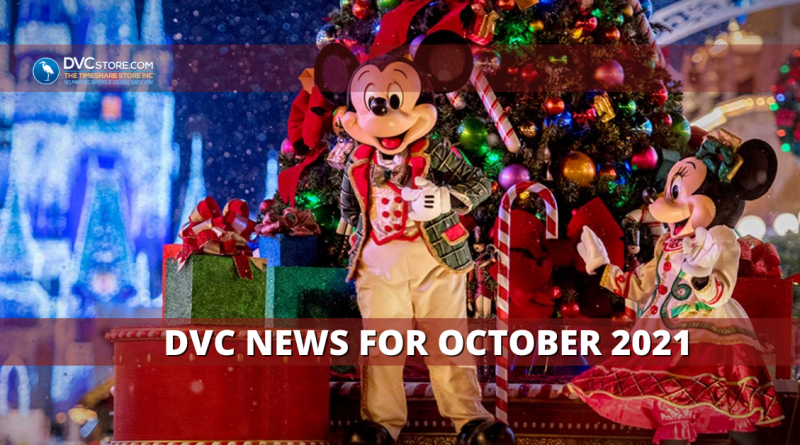 Over the past month, Disney has switched its theme park decorations from Halloween to Christmas.

Also, the company has announced details regarding the 2022 EPCOT International Festival of the Arts.

We also have updates on new and upcoming park features and some DVC membership updates.

Let’s catch up on this month’s DVC News.

I’ve got two huge stories for you this month, both of which will impact your DVC membership.

Are you a card-carrying member of the DVC program? Disney introduced this system in 2016 as a means of verifying discounts and the like.

Park employees asked DVC owners to prove they qualified for discounts by presenting their cards.

The program never made a lick of sense in the digital era. After all, if Disney needed this information, it could have checked your MagicBand.

Remember how your MagicBand glows a different shade of blue to give you that “Welcome home!” at the parks?

That’s only possible because your MagicBand knows you’re a member. As such, the membership card proved redundant.

Well, DVC officials have finally acknowledged this and will eliminate physical cards for 2022.

Starting on January 1st, you’ll prove your membership via the membership website. As a pro tip, you can screenshot your information on your phone.

Then, when you add that picture to your phone’s digital wallet, you can quickdraw it as needed.

The other news of note involves DVC’s annual dues for 2022. These prices aren’t official until after the Condo Association Meeting on December 9th.

However, Disney rarely changes them. So, here are the proposed prices for maintenance fees for next year:

Every year, I marvel at how seamlessly Disney theme parks transition from Halloween to Christmas.

In the witching hour of Halloween, Magic Kingdom guests celebrated the holiday in style.

Then, by 8 a.m. the following morning, mere hours later, the parks had switched to Christmas decorations.

We’ll go into detail about what you’ll find at Disney in next week’s article, giving you some time to enjoy Thanksgiving first.

However, I can tell you that Gingerbread Houses are back in vogue at DVC resorts!

Okay, we’re only talking about two of them, but that’s more than last year.

Presuming that you visit Disney’s Grand Floridian Resort & Spa or Disney’s Beach Club over the next six weeks, you’ll find your favorite decorations!

The Gingerbread Carousel at Beach Club has returned with a Little Mermaid theme in 2021. And the Gingerbread House at the Grand Floridian is selling baked goods once again!

At The American Adventure at EPCOT’s World Showcase, another Gingerbread display will return on November 26th.

Magic Kingdom and Disneyland have both debuted their new after-hours events, too.

Disneyland Merriest Nites has already sold out all its events this year, although the park could always add more.

The unquestioned star of this new party is The Muppets Caroling Coach. Isn’t it glorious?

Disney Very Merriest After Hours has also opened to glowing word of mouth. Several nights of this event have sold out, but it’s not too late to book some others.

Park officials have also confirmed the narrators for the triumphant return of EPCOT’s Candlelight Processional. You can read the complete list here.

Overall, Disney theme parks aren’t all the way back to pre-pandemic amenities. Still, this year’s celebration is much closer in spirit to 2019 than the 2020 one we’d all like to forget.

Okay, we’re right at a month into the Disney Genie era at Walt Disney World. Unfortunately, it still hasn’t debuted yet at Disneyland Resort.

However, we have learned more about the program. For starters, Disney CEO Bob Chapek indicated that nearly one-third of park guests order Disney Genie+.

That’s not quite the same conversion rate that MaxPass had at Disneyland, but it’s still music to Disney’s ears.

Overall, guests are paying 30 percent more than they were in 2019, meaning that the loyal customers who visited during the pandemic spent more at the parks.

Disney can attribute only part of that to Disney Genie+ and Lightning Lane. However, it reinforces that these features are likely here to stay.

Meanwhile, Disney Genie continues to impress new guests and pretty much nobody else. Honestly, it’s just not a great service for Disney veterans, at least not yet.

Lightning Lane has proved a clever strategy, at least on some attractions. I view it as a must-do for Star Wars: Rise of the Resistance.

The same is true for Remy’s Ratatouille Adventure if you don’t snag a Virtual Queue spot for it in the morning.

Reservations have since opened to everyone. Chapek indicates that the first few months have virtually sold out.

That’s something you can track on your own at the official site under the Planning tab. As I type this, there isn’t consistent availability until July!

Disney News and Notes for the Month

Let’s start with the news that could impact your next trip the most, at least if you’re flying.

Clear and Orlando International Airport have joined together to create a new pilot program.

This new system allows you to schedule your security check at the airport, thereby potentially saving you oh so much time and aggravation.

We all know what it’s like when the screening lines aren’t moving. So, you might be able to skip that headache next time.

In news of the vague but possibly significant, Disney has filed the paperwork to re-route traffic around the Grand Floridian.

Nobody’s quite sure what Disney will do with this land. Still, it could lead to a Magic Kingdom or hotel expansion or possibly even something new.

Disney has also confirmed the dates for the 2022 edition of the EPCOT International Festival of the Arts.

The event begins on January 14th and runs through February 21st…and yes! The DISNEY ON BROADWAY concert series will return!

Disney hasn’t published the performance schedule yet. Keep checking this page to learn which Broadway musicians will play at the event.

Walt Disney World could ostensibly alter its mask rules for guests at any time. Thus far, the only change has occurred behind the scenes, though.

Cast members no longer need to wear masks backstage. In other words, when you can’t see a Disney worker, they can go mask-less.

However, Disney still asks its employees to use face-coverings when in sight of park guests.

Presuming that COVID numbers remain low during the holidays, Disney will likely loosen its restrictions early in 2022, if not sooner.

Have a lovely Thanksgiving, my American friends! To everyone else, enjoy your weekend!