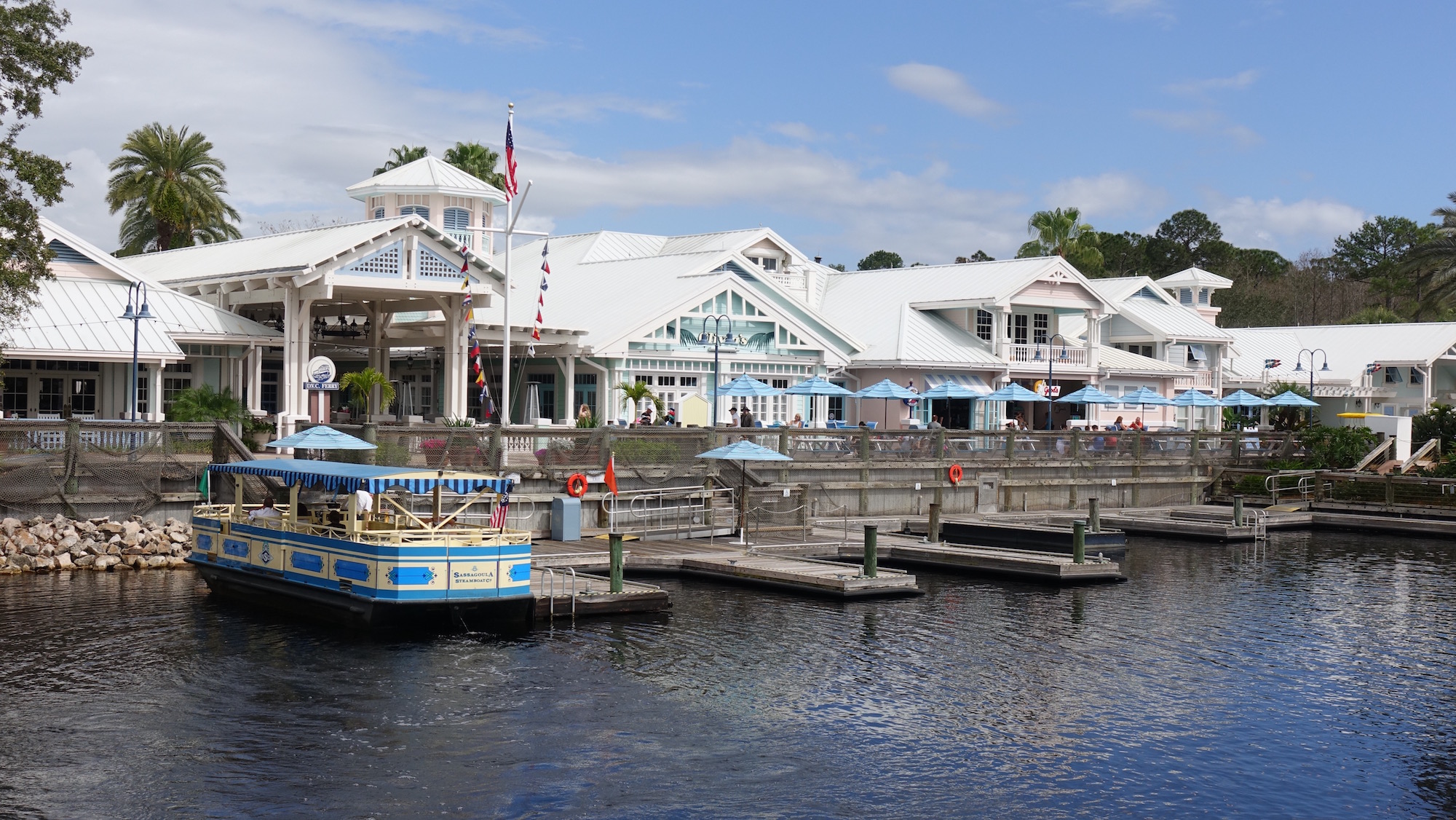 A dear friend of ours recently bought into the Disney Vacation Club (DVC) for the first time. They were one of many people impacted by Disney’s maddening decision to alter the rules again for 2019. During the limited time they had to research their purchase, they debated a pair of properties. I was fascinated by the discussion and thought they made the perfect entries for a comparison. Here’s a DVC showdown between Disney’s Old Key West Resort and Disney’s Saratoga Springs Resort & Spa.
Comparing DVC Contracts
Here’s my standard clause from last time, which still applies: “Let’s start with a few statements of the obvious. All DVC resorts feature mind-blowingly spectacular amenities. Generally, they have delicious restaurants and luxurious pools, creating a kind of special club life for DVC members. Your home away from home at Disney might be nicer than your actual home. As such, any evaluation of a DVC property will be a matter of scale. No matter which one you choose, you’re going to love it.”
Old Key West is the oldest and original DVC property. Saratoga Springs debuted in 2004 on the site of the former Disney Institute. For various reasons, both properties skew a bit older than other DVC resorts. The ample access to golf and Disney Springs shopping/dining likely plays a factor, as does the laid back atmosphere of each hotel. They’re both serene campuses for folks who have visited Disney theme parks so much that they can take a more systematic approach to their vacations.
Something that you’ll like about both resorts is that they’re relatively easy to book. Generally, these are two of the likeliest properties to have availability, partially because they’re the two largest properties. Old Key West books 761 rooms while Saratoga Springs sells 888. The next highest resort inventory is 708 rooms at Disney’s Animal Kingdom Villas.

Old Key West Contract Facts
Old Key West has one of the messiest contract situations in the DVC program. The official end date is January 31, 2042. Disney executives made a regrettable decision to offer extensions to Old Key West owners. The process didn’t go smoothly.
The price changed multiple times during the extension window. For this reason, you’ll see some contracts with expiration dates of January 31, 2057. In a vacuum, you should prefer the 2057 contracts, but only you can determine how much extra value you place in 15 more years of the program.
With so much availability, you won’t have a problem booking here at the seven-month window on most occasions. Since one of the advantages of the Home Resort is the eleven-month booking window, Old Key West and Saratoga Springs are both sort of a waste in this one area. After all, when you book at the seven-month window, you don’t need the additional time of those extra four months.
This slight reduction in value is offset by a couple of huge benefits of Old Key West ownership. One is the generous points chart. You can spend a week at this resort for 76-78 points during Adventure and Choice Season. Even Magic Season costs only 108 points for a week in a studio. And that brings us to sunny point number two.
The rooms at Old Key West are the largest of any DVC resort. The explanation circles back to the origins of the program. Disney initially envisioned DVC as a timeshare-like program, even if they stubbornly refused to call it that. Timeshares are generally large villas with ample space. So, Old Key West, the first resort, has studio hotel rooms that are 390 square feet. They feel massive and are my favorite of all DVC floor plans.
Remarkably, the hotel suites are even bigger relative to the DVC norm. A one-bedroom villa is 1,005 square feet. I have a dear friend who won’t stay anywhere else because he loves the value and space of Old Key West’s one-bedroom suites too much. The two-bedrooms are that much larger at 1,395 square feet, although I don’t see them as having quite the same value as the one-bedrooms. Finally, Old Key West books a few Grand Villas, massive spaces with 2,375 square feet. These “hotel rooms” may be larger than your home.
The other concern about Old Key West is its scope. This resort is gigantic in size to the point that Disney buses have multiple drop-offs along the way. Guests who stay toward the back of the campus will need 10 extra minutes just to leave and return. For this reason, Disney books Hospitality House as a room type.
These buildings are close to the hotel lobby and other major amenities at the resort including Olivia’s Café, a DVC member favorite. People staying at Hospitality House will have a much easier time with logistics, although I know a lot of Old Key West owners who prefer Turtle Pond or Miller Road rooms. To each their own.

Saratoga Springs Contract Facts
Saratoga Springs features three spectacular amenities that merit immediate mention. One is the golf course onsite. Disney’s Lake Buena Vista Golf Course has actually hosted PGA events, validating it as one of the most beautiful places for duffers in Florida. You’ll shoot 90 here unless you’re terrific, but you’ll have the time of your life doing it.
As the hotel name suggests, Saratoga Springs is also one of only three Walt Disney World resorts with a spa on site. Senses – A Disney Spa is the place to go when you want to luxuriate on your vacation. You’ll have your pick of facials and massages here.
The third and most important amenity is the short walk to Disney Springs. You’ll simply walk for a few minutes until you cross a bridge into the entertainment district. This access does come with a caveat. Some guests at Saratoga Springs find the bustling area a bit noisy, but many more appreciate immediate access to the finest shopping and dining at Walt Disney World.
In terms of DVC contracts, Saratoga Springs has an expiration date of January 31, 2054. In most instances, that’s 12 years longer than Old Key West, although it’s also three years less compared to contracts with the 2057 extension. As you can see, the Old Key West extensions muck up everything.
Saratoga Springs claims points chart to Old Key West. You can stay here for 83-92 points per week during Adventure and Choice Season. Even Magic Season availability is only 106 points for a week.
The sticking point is that Saratoga Springs, like Old Key West, has a second booking type. Unlike House, however, it isn’t the same price. Preferred Rooms at Saratoga Springs are in the most desirable parts of the campus, Congress Park and The Springs. Under the current points chart, these rooms always cost 2-3 points more than ones in other sections of the hotel campus.
The most significant difference between the two resorts is in sizes. A Saratoga Springs studio is 355 square feet, and while 35 square feet may not sound like a huge gap, it’s roughly 10 percent more space at Old Key West. You’ll appreciate it when you have it.
The gap in villas is that much more significant. A one-bedroom at Saratoga Springs is 714 square feet while a two-bedroom is 1,070 square feet. The Grand Villas here are closer at 2,113 square feet. In other words, if space is important to you, pick Old Key West.
Of course, Saratoga Springs offers a room type that’s a strong selling point in and of itself. The Treehouse Villas are spectacular achievements in design. They look like octagons on stilts. You can watch this video to appreciate their genius. At 1,074 square feet, they’re isolated and rustic and one of the coolest experiences DVC members can have while spending a few days at Walt Disney World.
While I love Old Key West, it doesn’t have anything on a par with this. And speaking of par, it doesn’t have a golf course right by its boat dock, either. To get either of these things, you’ll need to stay at Saratoga Springs.
Current Pricing for Both Resorts
Again, I list current pricing in these articles so that you’ll witness how much DVC prices tend to go up over time. It’s a great way to see how strong in the DVC program is. As you may know, Disney recently increased the prices for direct purchase, thereby extending the gap between resales ownership and its more expensive cousin.
Currently, Old Key West costs $155 per point directly, while Saratoga Springs is $160 per point. Before June 16, 2019, they’d been the same price per point, $151. You can contrast that with resales at the two properties. Old Key West has a general range of $89-$95 per point, while Saratoga Springs regularly lists between $98 and $105 per point. As always, you’ll pay more per point for smaller contracts and less per point for larger ones. I’ve found that the sweet spot on pricing is between 100 and 150 points, but you may feel differently.
Historically, Old Key West and Saratoga Springs were priced similarly. The latter resort has only recently become the more expensive one. Disney’s direct pricing is likely a factor here, as potential DVC customers understand that the company charges more for Saratoga Springs. Also, the gap has, coincidentally or not, occurred since Disney added the Preferred room type at the resort plus the (relatively) new bridge to Disney Springs.
Deciding Where to Stay
I should confess that I own points at Old Key West. The family that I mentioned above went a different way. I advised them to purchase at my home resort, but they chose Saratoga Springs instead. Their rationale involved the convenient access to Disney Springs and upscale amenities at the resort.
I understand their perspective. I’m a tall man, though. The extra space at Old Key West’s hotel rooms matters a great deal to me. I also love eating at Olivia’s Café and prefer taking the hotel boat to Disney Springs rather than walking from Saratoga Springs. Also, the noise at Disney Springs can bother me when I stay in certain buildings at Saratoga Springs. Finally, I’m not much of a golfer and don’t get my nails done. So, the golf course and spa don’t appeal to me as they would to many people.
Between these two resorts, I pick Old Key West without hesitation. For potential DVC members looking for a more relaxed vacation, however, Saratoga Springs is an excellent choice, though.