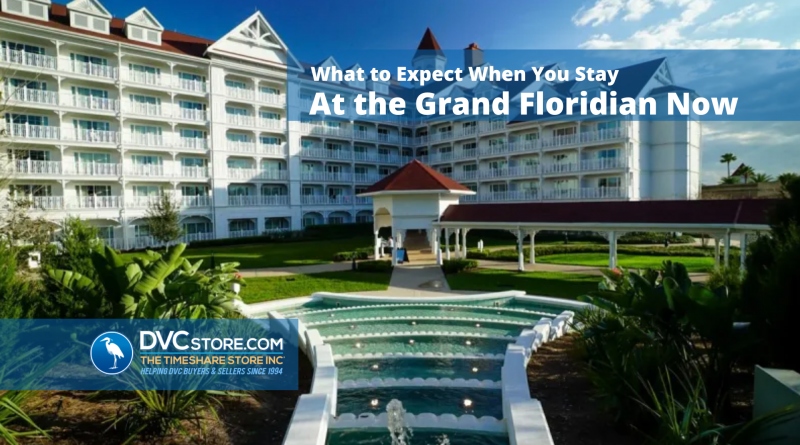 Since its arrival in 1988, Disney’s Grand Floridian Resort & Spa has remained the centerpiece of the Walt Disney World hotel lineup.

In 2013, Disney Vacation Club members finally gained one of their greatest wishes when the resort joined the DVC program.

Unfortunately, inventory remained low for the body of a decade, as the Grand Floridian offered the lowest inventory in the entire DVC catalog.

Now, something has happened for the first second time ever. An existing DVC property has added an entire new building of hotel rooms.

So, this changes what you should expect when you stay at the Grand Floridian. Let’s talk about all the reasons you’ll love your visit!

You’ll know that you’re at the Grand Floridian as you enter the door of the hotel lobby.

A nattily dressed doorperson will greet you and answer any questions you may have.

The greeters at the Grand Floridian have evolved into something of an institution, thanks in large part to the contributions of the late Richard Gerth.

This lovely human being retired and then started working at the hotel as a means of passing the time. He turned into an iconic, instantly recognizable cast member.

Since his death, Disney has hired others to carry the torch, and they’re all delightful. For this reason, you should always spend some time in the hotel lobby.

Of course, you’ll want to do that anyway, as this lobby is arguably the best in the DVC lineup.

To the elevator’s side are the kind of steps that would seem right at home on the set of Gone with the Wind.

In a word, the Grand Floridian lobby is plush. However, it’s also functional, as cast members stand at the ready just beyond the entrance.

After a bit of wondering, you’ll encounter several different restaurants and lounges, all of which connect to the lobby.

Narcoosee’s, Citricos, and Gasparilla Island Grill are also within a short walk of the lobby.

More importantly, the second floor connects to the monorail station, adding a level of convenience to your hotel stay.

Of course, the classiest touch is the piano sitting in the middle of the lobby.

When a musician performs classic Disney tunes on this instrument, you’ll never want to leave.

Hanging Out at Grand Floridian

I just mentioned several dining options at the hotel. That’s where a Grand Floridian conversation should start, as it offers arguably the best set of restaurants at Walt Disney World.

I already mentioned their names, but let’s focus on the biggie. Victoria & Albert’s has won awards as one of THE best restaurants in America.

For clarity, I’m not talking about theme parks alone. Respected foodie sites have listed it in the top five in the country.

As far as hotel restaurants go, Victoria & Albert’s is hard to top. Still, it’s somehow only the tip of the iceberg at the hotel.

Obviously, the lobby and its piano/elevator provide tons of entertainment, especially when cast members decorate the place for the various holidays.

The pools at the hotel are of the highest level. One of them features a water play area with an oversized Mad Hatter hat. It overflows every few minutes, dumping water on delighted kids.

Both pools reside close to the beachfront walkways that connect this resort to Disney’s Polynesian Village Resort.

You’ll also find a boat dock where nautical enthusiasts have parked their vehicles. Disney will even rent you a boat if you’re seeking some adventure!

Also, one of the best amenities is right there in the name. Senses Spa at the Grand Floridian has attained legendary status over the years.

What’s Close to the Grand Floridian?

Let’s just say that Magic Kingdom is close enough that you can walk. In 2021, Disney finally gave in to a longstanding tourist request.

The Grand Floridian added a walkway that takes about 15-20 minutes to reach Magic Kingdom.

Of course, you could save yourself the aggravation by taking the monorail to the park instead.

Similarly, you can jump off at the Transportation and Ticket Center. From there, you can take the direct monorail to EPCOT.

So, you’re a monorail ride away from two parks. Oh, and you can also take a boat from Magic Kingdom to the Grand Floridian.

I highly recommend that you try this at some point. It’s lovely at night and genuinely magical if the fireworks show happens to be going.

When you stay at the Grand Floridian, the park that’s farthest away is Disney’s Animal Kingdom.

Google indicates a 7.6-mile trip by bus. It estimates a 13-minute ride, although I think that’s a couple of minutes low.

Disney’s Hollywood Studios is also seven miles away. However, it’s easier to reach and should only take 11 or 12 minutes.

The New Stuff at Grand Floridian

Before June of 2022, conversations regarding Grand Floridian stays were easy. Due to the paucity of available rooms, there wasn’t much variation.

In the process, DVC has tripled its Grand Floridian inventory and added a new room type.

Conveniently, DVC has split the room types into two different sections. For this reason, you’ll know whether you’re staying in the “old” rooms from 2013 or the new ones from 2022.

The Deluxe Studio room type signifies the prior DVC addition. These rooms reside in the building Disney built from the ground up in 2012.

You’ll know you’re here when you see the penguins from Mary Poppins in a fountain! It’s a delightful water feature that has charmed DVC fans for a decade.

As such, you can book wherever you want to stay, a rarity in the DVC library.

In the Deluxe Studios, your room type choices include Standard View and Lake View. However, Resort Studios have added a new option: Theme Park View.

Until now, you could only find this DVC room type at Bay Lake Tower at Disney’s Contemporary Resort.

Please know that you’ll spend the same number of DVC Points for either a Resort Studio or Deluxe Studio.

Theme Park View rooms do cost 16-30 percent more, though. The exact total depends on the time of your resort stay.

Obviously, you cannot go wrong with either choice. You’re at the Grand Floridian! It’s the centerpiece resort at Walt Disney World!