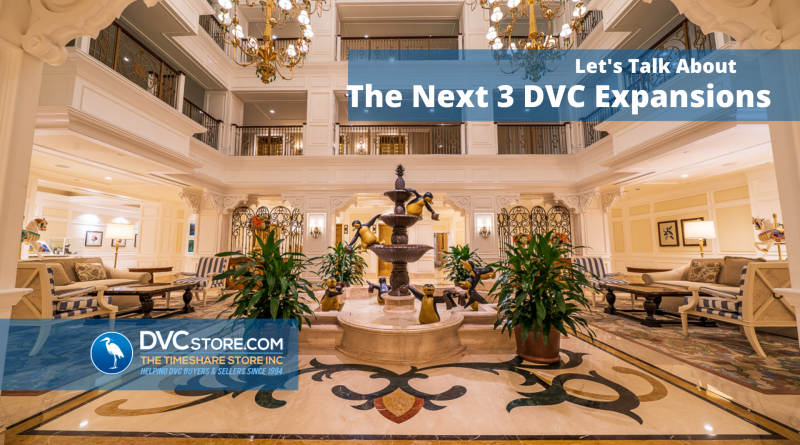 When that happens, Disney Vacation Club members may book the first of three upcoming expansions at existing properties.

Today, let’s examine each one and discuss everything that we know.

About the Grand Floridian

The Grand Floridian opened to the public in 1988, only three years before the debut of the Disney Vacation Club.

So, I’m not exaggerating when I say that some DVC members hungered for an ownership interest there for more than 20 years.

DVC wouldn’t introduce a Grand Floridian purchasing option until 2013. And the new option felt like the very definition of “Take what you can get.”

The Villas at Disney’s Grand Floridian Resort & Spa only introduced 100 total units, a maximum of 147 rooms of inventory.

We’re talking about a resort with 867 rooms. As such, the addition has always felt like a half-measure.

Thankfully, DVC officials recognized this and took steps to address the problem.

Once that happens, this building will consist entirely of DVC rooms, thereby nearly tripling the number of Grand Floridian rooms in the DVC inventory.

Between the 2013 phase and the current expansion, this resort will now include:

Obviously, that’s a sizable increase, one that dramatically improves your odds of owning and booking here.

Personally, I find that decision a bit odd. Still, it does match Citricos, the Grand Floridian restaurant that just re-themed to Mary Poppins.

Realistically, Mary Poppins qualifies as one of the crown jewels of Disney’s live-action library. But, unfortunately, its sequel wasn’t as well received.

More about the Grand Floridian

The most vital aspect of the Grand Floridian expansion has little to do with the rooms themselves. Instead, it’s DVC’s decision-making.

Executives could have split the Grand Floridian into two contracts, akin to what happened with the DVC offerings at Disney’s Wilderness Lodge.

Instead, new owners at the Grand Floridian will fall under the original Condominium Association.

From a certain perspective, that’s a cleaner way to introduce new rooms.

Everyone who owns at the Grand Floridian will share the same inventory and expiration date, which is January 31st, 2064.

Still, the new expansion will include something unique. DVC will book a new room type, Theme Park View.

I obviously cannot speak about whether the view justifies the price yet. Instead, all I know is that these rooms cost up to 25 percent more than the standard room type.

All other things being equal, you may care more about the building where you’re staying than the view.

Overall, the impending opening of the new DVC building will come with a massively positive effect for all DVC members.

Also, Disney deserves credit for how well it has handled this expansion.

The prices have proved reasonable, and the shared Condominium Association strikes me as the better choice for consumers.

About the Disneyland Hotel Expansion

A few weeks ago, former DVC boss Ken Potrock, the President of Disneyland Resort, posted some images on Instagram.

These pictures showed the current state of the Disneyland Hotel expansion tower coming to DVC in 2023.

Potrock bragged that the project has gone vertical, a good sign that it’ll follow its current timeline.

DVC announced this project roughly two years ago. Disney had submitted a proposal to the Anaheim City Council.

The plan called for a 12-story DVC tower on the Disneyland Hotel campus. The City Council approved this plan in July of 2020, a vital step.

Many DVC members remember that Disney had previously announced a similar project in the Downtown Disney area, only to run into conflict.

The City Council members at the time bristled at providing Disney with hundreds of millions of tax dollars. So, Disney killed the project.

For this reason, the Disneyland expansion tower qualifies as Plan B. It’ll reportedly include 350 new DVC rooms, which is massive.

Disneyland fans know that The Villas at Disney’s Grand Californian Hotel & Spa represents the toughest reservation of all for DVC members.

The Happiest Place on Earth has needed a more extensive DVC inventory for many years now. So, this expansion cannot get here soon enough for those folks.

Disney has posted images of the proposed structure. The recent ones show facing on the building’s exterior that can change appearance.

Beyond that, we haven’t learned much new. It’s an expansion on two acres of land that will include an interactive play area and pool.

Also, not every building is 12 stories tall. In fact, some are as small as five stories.

Disney has done this to prevent the taller structures from obscuring the views of residents in the surrounding neighborhoods.

About the Polynesian Village Expansion

For longtime Disney vacationers, the opportunity cost of this project is sizable.

Disney has reclaimed the land previously used for Luau Cove and the Spirit of Aloha dinner show.

In their stead, Disney will build a new expansion tower on the shores of Seven Seas Lagoon.

The early images show a beachfront hotel with ample seating areas by the water and a nearby pool that’s yet to be built.

This expansion tower will apparently open in 2024. Also, like the Disneyland Tower expansion, it won’t be one building but several, possibly of different heights.

Disney hasn’t provided an estimate for the number of new rooms yet. However, the building’s images suggest at least 200 rooms and possibly 50+ more.

One notable aspect of the blueprints is a Porte Cochere, which means this expansion may come with its own lobby.

For this reason, I have no idea how Disney will approach the Condominium Association here.

DVC could feasibly add the rooms here to the existing inventory a la the Grand Floridian.

On the other hand, standalone check-in could suggest that it’ll be a new property akin to the Copper Creek expansion.

Nobody knows for sure and likely will not until early in 2024. Personally, I prefer merging the new inventory into the existing Condominium Association.

By merging, DVC keeps the booking system straightforward, which should be the goal here.

So, there you have it. We’ve got three new DVC offerings coming soon.

The first ones will debut in less than two months, while the others should arrive over the next two years. It’s an exciting time to be a member!